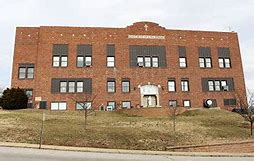 On August 27, 1865, the church building was dedicated under the invocation of St. Rose of Lima.  It was September 1, 1891 that school bells rang for the first time to announce the opening of the new parish school at St. Rose of Lima in DeSoto.  The school was held in what was originally the first Catholic Church in DeSoto.  Ursuline nuns from St. Louis had been asked to staff the school.  The Ursuline nuns continued their service of teaching at St .Rose for ninety-four years and have exercised considerable influence on the students they have taught.  Enrollment during this first year was 150 pupils, of whom 15 were not Catholic.  Grades one through eight were usual grades that were taught at St .Rose, with two grades being combined in the same classroom for many years.

In 1892, Father William Newman was named pastor and the school enlarged ten by twelve and half feet.  In 1922, Father Joseph Newman was named pastor and the 9th and 10th grade classrooms were discontinued in the parish school.  In 1925 Monsignor Edward Rogers was named pastor.  In 1929, it became apparent that a new and modern school was sorely needed.  An intensive drive was begun among the parishioners to raise sufficient funds to begin work on a new school.  The Labor Day Picnics had started three years earlier to accomplish this.  A new three story brick building was dedicated with five classrooms on the main floor, an auditorium on the upper floor, and a cafeteria on the lower floor.  The school was equipped with all new furnishings, donated by the parishioners.  The auditorium on the upper floor was often the site of numerous activities of the school, parish, and the civic community.  At the laying of the cornerstone of the new school building in April 1929, Felix Milfeld, who had prepared the contents of the cornerstone, claimed that the pictures preserved within it would be clear and bright for another 200 years!

In 1950, the first lay teachers were put on the staff of St. Rose school.  Because enrollment at St. Rose was gradually increasing upwards to 400 students and beyond, a major renovation program of the school building was begun in July of 1955 and completed by December 1956.  Father Francis Hyland was the pastor.  Plans called for remodeling the auditorium on the upper floor to five new classrooms as well as the installation of three new lavatories, the construction of a stainless steel kitchen in the cafeteria, and the laying of new tile (28 colors) on the floor of the cafeteria.  The hardwood floors throughout the school were covered with asphalt or rubber tile.

During the 1960's the students were happy to find the following changes that were made in and around school:  a fire escape was installed from the upper floor hallway directly down to the playground, a new ramp was built to connect the north door of school with the playground, and iron railings were installed at the south entrance to school.  A hot lunch program available to all students began in 1955 and continues today and with the erection of the new convent and rectory buildings, another era had come to an end - that of sitting in the swing on the front porch of the convent while waiting for music lessons to begin!

Improvements continued to be made in the school building during the 1970's to provide the best atmosphere for learning by the students.  some of these improvements included:  replacement of two outside doors on north and south sides, installing carpeting in the library, office and faculty room, pouring a concrete floor in the storage room under the school lavatories, replacement of windows with glass blocks and bricks and tuck pointing on the 4th street side of school, and installing new equipment on the playground.

In 1980, Father Edward Hilgeman was named pastor.  In 1981 the cafeteria was air conditioned.  In 1993, the St. Rose School "Adopt-A-Student" program was started and was later changed to "Adopt-An-Angel" program, which still exists today.  In 1995, a group of mothers began St. Rose's annual auction.  It is celebrating its 25th year.  This year could top $2,000,000 in money raised that directly benefits the children of St. Rose.

In 2001, a new school entrance and sidewalk were installed on 4th Street and the cafeteria was made handicapped accessible.  Air conditioners were installed in all of the classrooms.  In 2008, Father Alexander Anderson was named pastor.  Improvements have continued with the office being moved and remodeled, the faculty lounge was updated, and the library was expanded and moved upstairs.  Over the summer of 2010, plans were completed for a total re-landscaping of the front of the school and new ovens were purchased and installed in the cafeteria.  In 2015, a new covered entrance to the playground was built, and in 2016, a covered entrance to 4th street was donated by the St. Rose Quilters.   In the spring of 2017, an anonymous donor gave a large amount of money for the construction of St. Rose Hall.  After the completion of St. Rose Hall, new playground equipment was purchased and installed.  In 2019, the new 3-year old preschool program was introduced and classrooms were moved to accommodate the addition.  The library was relocated to the cafeteria level and has now been on all three levels of St. Rose.  A new cafeteria ceiling was installed, all air conditioners were updated, and the music department was expanded.

Today, St. Rose has 123 students from preschool to 8th grades and continues to grow about 10% each year.  Our goal is to continue the proud and long tradition for the past 125+ years of providing quality Catholic education well into the future.